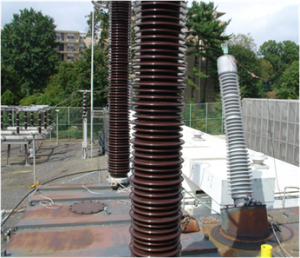 Compared with routine methods, the dry ice cleaning technology is safe, inexpensive, and damage-free. The inherent mechanism on the removal of contaminants from insulators using dry ice is studied in this paper.

The dry ice cleaning process involves in the thermal changes, kinetic energy variation, sublimation of energy, and the resultant drag force of air stream. In the present paper the cleaning process is separated into two independent states to simplify the computational model: the impact process and the sublimation process. The fracture condition and the removal condition are proposed by analyzing the different forces on contaminant surfaces based on this model.

Two conclusions are drawn by a case study. One is that the stress at the impact point contributes the most to the fracture process. The other is that the micro blasting impact force caused by the sublimation process is the dominant influence factor on the removal of contaminants. The factors influencing the removal rate are investigated in a series of dry ice cleaning experiments. Experimental results show that the thermal stress has little influence on contaminants removal. Furthermore, the dry ice cleaning technology can effectively remove contamination layer.